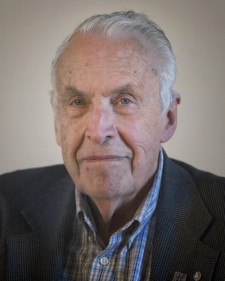 The award will be presented during a gala dinner on Feb. 28 at The Depot Minneapolis.

Minneapolis, MN, January 12, 2017 (Newswire.com) - Don Craighead, founder and former CEO of Power/mation as well as a tireless advocate of Minnesota's technology industry for more than 50 years, will receive the first annual Lifetime Achievement Award from the Robotics Alley Conference & Expo. The award will be presented during a gala dinner hosted by Power/mation on Feb. 28, 2017, at The Depot Minneapolis.

Don founded Power/mation in 1961, just four years after graduating from the University of Minnesota with a degree in mechanical engineering. The company remains a leader today in advanced automation applications.

"Power/mation was founded by Don Craighead 55 years ago. His creativity, entrepreneurialism, commitment to networking and strong work ethic are still at the core of our organization today."

“Power/mation was founded by Don Craighead 55 years ago. His creativity, entrepreneurialism, commitment to networking and strong work ethic are still at the core of our organization today. Our company roots are strong and we are proud to be associated with Mr. Craighead as he receives this well-deserved recognition by Robotics Alley,” said Tim York, CEO of Power/mation.

Don sold the company in 1990. In “retirement,” he has maintained an active role with numerous boards, professional organizations, and civic groups. The list of his activities and community service is extensive, but a sampling of the organizations he has been involved with includes Century College, the National Youth Leadership Council, Hennepin Technical College, The Works Museum, Manufacturers’ Alliance, the University of St. Thomas, Dunwoody Institute, Positive Coaching Alliance, and AirSpace MN, among many others.

“Don brings the tireless work ethic that made him successful in business to everything he does,” said Eileen Manning, Executive Producer of Robotics Alley. “The number of people who have benefitted from his insight and advocacy is inspiring, and we are delighted that he will be the first ever recipient of the Robotics Alley Lifetime Achievement Award.”

This inaugural gala, from 6:30 to 9 p.m. on Feb. 28, will feature dinner, drinks and special guest speakers to highlight Don and the many ways he has championed robotics, automation and STEM education.

The dinner will take place after Day 1 of the 2017 Robotics Alley Conference & Expo. VIP conference pass holders will receive complimentary admission to the dinner. Individual tickets ($85) and corporate tables ($1,500) are also available for purchase. Reserve your seats and book your hotel room (hotel block ends Feb. 6) by calling Amanda Hallberg at 763-548-1309 or visiting www.roboticsalley.org.